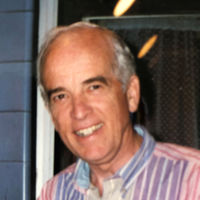 Jones, Gareth It is with deep sorrow that we announce the death of Gareth Jones (Port Hope) loving husband and father who passed away peacefully on Tuesday July 7, 2020 at the age of 84. Gareth was born in Wigan, England on September 3, 1935 to Ceridwen Owen and John Roland Jones. He married the love of his life, Gillian Myra, in 1963 who survives him. He is also survived by his daughters, Nicola (Rob Stavinga) of Lindsay, and Sian (Douglas Peck) and grandchildren Kaeleigh and Alexa Peck of Pickering. Gareth and Gillian came from England in 1964 on a working holiday adventure to teach Mathematics at Trinity College School, Port Hope. While they returned to England briefly, they officially immigrated to Canada in 1970. Gareth became Mathematics Department Head and later Assistant Head at TCS prior to retiring in June, 1998. Gareth was an avid soccer fan who supported the TCS Bears and the Everton Football Club. He coached Badminton and Cricket while at TCS and supported many other teams. He was a member of the Port Hope United Church and a past member of Stratford's Knox Presbyterian Church during their wonderful years in Stratford. Gareth was a true gentleman and a kind, caring soul who always thought of others before himself. Beati mundo corde. In lieu of flowers memorial donations can be made in Gareth's name to Trinity College School foundation www.tcs.on.ca/donate or by leaving at message at 905-885-1295 or World Vision, donate.worldvision.ca. The family would like to thank Dr. Stratford, Dr. Dahl, Amanda and the staff at Port Hope Extendicare, the Roseglen Village staff and Dr. Azzopardi for all their care over the years. A celebration of life will follow at a later date, based on health guidelines. www.allisonfuneralhome.com