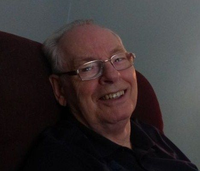 Daigneault, Leo Paul July 9, 1932 - July 4, 2020 After a brief illness, Paul Daigneault passed away in his sleep at NHH, Cobourg. Paul was the beloved husband of Ruth (Rood), loving father of Michael (Terry) and John (Christine), and will be sorely missed by grandchildren, Erika, Hayley and Noah and his Port Hope family Debbie Taylor, Rick Trumper, Heather and Kevin Lang, Tony and Liana Rood, grandchildren and great-grandchildren . Paul is survived by brother Marcel, predeceased by wife Colette, sister Aline (Bob Meikle), and brothers Fernand, Victor, Ivan, Roland, Albert. Paul was a loving man, a caregiver, honest, affectionate and loved. We are all saddened by his passing. Paul was born in Ansonville, a small paper mill town 35 miles east of Timmins, the third of eight children. These were depression years and to keep his family fed, Paul's father moved from town to town, including Kirkland Lake where Paul spent much of his childhood. During his teens, Paul wrote a great many poems, which told of things in his life and how he felt about them. A hard worker even as a child, Paul sought jobs in every town he lived, including Virginiatown and Malartic where he 'spotted' pins in the local bowling alleys. During those days, he developed a severe cough which turned into Tuberculosis. Paul went to live with his grandparents in Ansonville where he rested several months until the cough subsided enough for him to start school. Paul loved to play sports, especially hockey, which he did with his cousins was a great fan of the Ottawa Senators and wore his Sens jacket proudly. Paul graduated high school in Iroquois Falls and joined the Bank of Commerce, now known as CIBC. He rose to become Bank Manager and in that capacity established the first bank in Moosonee before moving with his wife, Colette, and sons to several different locations in Ontario. In the mid-70s, Paul started a new career with the Government of Canada in the Building and Planning Department and remained there until his retirement. He also worked at H & R Block, eventually teaching classes on Tax Preparation. Paul was an active, longtime member of the Knights of Columbus at St. John the Baptist church in Nepean. In June 2012, Paul married Ruth Rood-Rogers, a longtime resident of Port Hope. The couple resided in Richmond, near Ottawa, until moving to Port Hope in 2005, where the two co-authored a book. Sadly, Paul had his left leg amputated in 2018 and after a lengthy hospital stay, took up residence at Hope Street Terrace, as Ruth was unable to provide the care he needed. Until the time of the Covid lockdown, Paul and Ruth had many outings to local restaurants and casinos. Paul was well-liked by the staff at Hope Street Terrace, and we cannot say enough about the kindness and friendliness of all who work there. The exceptional care he was given is much appreciated and never will be forgotten. Paul will be placed beside Colette in a small, peaceful country cemetery near the United Cemeteries of St Fillians, Maple Wood and Pine Grove near Carleton Place.