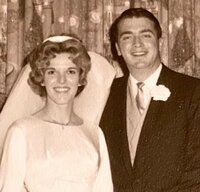 Chad, Reginald Gerald Reg, born on August 30, 1940 in Portage La Prairie, Manitoba to Alfred and Doris, passed away peacefully at NHH on October 3, 2021. He was the younger brother to Thomas of Sidney, B.C. Reg joined the RCMP in 1959, following in his father's footsteps. He worked in the Drug Section at various detachments throughout his career where he rose to the rank of Staff Sergeant. Reg retired from the Bowmanville detachment in 1994. Reg married Judi in 1964, a registered nurse, who was the love of his life. They were the proud parents of Michael (Jane) and Stephen (Dawne). The family loved to spend time at the cottage on Upper Stony Lake. Sadly Judi passed in 1994 after a battle with cancer. In his retirement years Reg enjoyed working at McGregor's Auction, re-caning furniture, BBQ'ing a great brisket, and volunteering for the Cobourg Police at the 'Trailer in the Park' as well as promoting rail safety to elementary students. He was the recipient of the National Roger Cyr Public-Rail Award. The greatest joy in Reg's life was being the grandfather to Page, Hunter, Zoe, Tessa and Quenten. He loved to take them on trips to Pingle's Farm, Cobourg Beach, and the Sandbanks when they were young and in recent years enjoyed seeing them become the adults they are today. Reg will be fondly remembered by his family and friends. A family gathering is planned. A special thanks to the staff at Empire Crossing and NHH for their care of Reg these past few years. Donations are welcomed to be made to the NHH foundation and the NH YMCA.