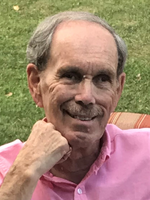 Hepburn, Edwin Passed away at Northumberland Hills Hospital, Cobourg on Friday November 5, 2021. Ed Hepburn beloved husband of Joan Hall, and dear father of Jackie Irwin (Ed), Jane Taylor (John Dooreleyers) and Michael Hepburn. Grandfather of Liam, Angus, Abbey, Molly, Joel, Jemma, Laura, Katie, Jack and Emma. Brother of Miriam Hutchinson (Bill) and Don Hepburn (Jean). He was born in Hebburn, England on August 18, 1940 and was one of three children to Alexander and Mary Hepburn. Ed and Joan immigrated to Port Hope, ON in January 1966. Ed has been a mainstay in Downtown Port Hope since that time. He loved gardening and sitting by the campfire at their trailer in Wilberforce where they spent many summers with their family. The family would like to thank the hardworking staff at Northumberland Hills Hospital Palliative care unit. Friends will be received at the Allison Funeral Home, 103 Mill Street North, Port Hope on Tuesday from 1-2 pm. If desired, memorial contributions may be made to Charity of Choice. www.allisonfuneralhome.com.