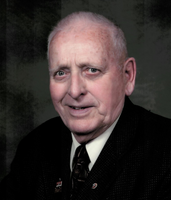 Has been called by our heavenly father to join his many friends and family members. On June 16 we said good bye to this much-loved man. He has left us all with 89 ½ years of wonderful memories. Pete was born on November 1, 1932 to Robert and Evelyn Hills. Although his given name was Franklin, his name to anyone that knew him was "Pete". Pete is the last of the "Hills". He will be reunited with his 11 brothers and sisters – Marjorie Davis, Phyllis Davis, Rosemary Taylor, Margaret Treasure, John, Pat, Ronald, Bim, Billy, Paul and Helen Hills. Pete leaves behind his pride and joy, his beloved wife of almost 62 years, Joan (nee Cook).

Although not blessed with children of his own, that did not stop him from affecting many children in a positive way over his lifetime. He was a positive influence to many with participation and mentorship in so many child focused activities including, hockey, baseball, scouts, the boys & girls club, to name a few. Pete was Big Brother for many years to Keith Cancilla, helping him to find his way and become a successful adult. He was instrumental in the success of the Northumberland Fare Share Food Bank – Port Hope, managing it for many years. Pete was honored with the designation of Port Hopes Outstanding Citizen in 1998. As an uncle he was the best and the 5 Harrison girls can tell many stories about being piled into the back of the Volkswagen with tent trailer in tow for a weeks camping. There are enough memories to keep us all laughing for years to come.

Pete was a proud veteran having served in the Korean War. We are all thankful for his service and shared in his pride as he shared many stories. A special thank you to Al Wilson for always making sure any available resources were instituted through the Legion as the need arose.

Pete had a strong faith and was a dedicated member of Our Lady of Mercy Catholic Church in Port Hope. He served as Grand Knight for the Knights of Columbus and was a devoted member for many years. Pete was a regular reader at church and weather he was singing or speaking, no microphone was required. When he was present, people knew! There is nothing he wouldn't do to help his fellow parishioners and aid his beloved church community.

He was a kind man and never had a bad word to say about anyone. Pete had a lot of fun over the years and seemed to attract people wherever he went. As the aging process took its toll, Pete and Joan were never without family and friends who were ever present to help in any way they could. This is a testament to how he lived and how he treated people throughout his life.

Pete is survived by his sister in law Fern Hills and many many nieces and nephews. He will not soon forgotten by the Harrison Girls – Marilyn (Bob Kearns), Sandy Ward (Jerome), Carol (Dave Horner), the late Donna Barre (Paul), Barb O'Neil (Mike Fawcett); Lorianne and Suzanne Gardner; the Decsi kids Sharon (Tom), Lockhart, Cindy (Kevin) and Michael; The Treasures – Jane, Gord (Robyn), Carolyn; the Davis girls Leigh, Ann Scott; Pam Hills; Joanne Austin (Rick) and many many more who called him Uncle Pete. He is also survived by numerous great and great-great nieces and nephews. He has left a lasting legacy and will not soon be forgotten.

There are so many people that he would have wanted to thank. Dr. Mule and the palliative care team at NHH made this whole process so much easier; Dr. Durante for his care and attention over the years; Our Lady of Mercy family for their care, concern and love; Friends, family and neighbours who were always there – especially neighbour BJ for being the go to guy for anything – you are a good neighbour! A big thanks to Hunter Drew for always being the guy who could fix anything and for taking over Pete's veggie garden! He enjoyed watching you work form his chair!

Pete will be missed by many but he will never be forgotten. A life well lived is what Pete leaves behind. When you think of Pete, please smile. He would be the first to tell you that he had a good life. Please continue his legacy – do good and be nice. We are quite certain that he is up to some very loud shenanigans with those that have gone before him, especially Joan's sister Nan and Donna. They will definitely help him create some noise. Rest now Pete – we've got this and know that you have left Joan in good hands.

Friends will be received at the Allison Funeral Home, 103 Mill Street North, Port Hope on Monday 6-8 pm. Funeral Mass at the Church of Our Lady of Mercy, 155 Walton Street, Port Hope on Tuesday, June 21 at 11 a.m. Face masks are required in the church. Interment, St. Mary's Cemetery. If desired, donations in Pete's honour may be made to Northumberland Fare Share Food Bank or St. Vincent de Paul Food Bank. Both charities close to his heart.